it’s been a month since A Little Game Called Mario dropped, so now seems as good a time as any to do a post(pre?)-mortem on this weird little project.

i guess a good place to start is “what the hell is A Little Game Called Mario” and “why are you so painfully committed to the bit that this post is A Little Blog Called Mario”? i think the first answer will allow you to make a pretty informed guess about the second: Little Mario (my preferred shortening that i will use from here on) was a dumb joke i made in passing on everyone’s favorite website twitter dot com, and was just so personally amused by it that i had no choice but to take it to its logical extreme.

so, Little Mario is a real video game that you can play, but imo the more interesting part is how it's made. you can read a more in-depth “artist’s statement” in the GitHub project's README (and i do still consider this to be more performance art than a "serious" project, for the record), but it’s more or less a take on the “who’s a real game developer?” discourse. not only does Little Mario attempt to significantly lower the barrier for anyone to “become a game developer”, but also to do so by working on (something that invokes the name of) one of the most well-known franchises of all-time. 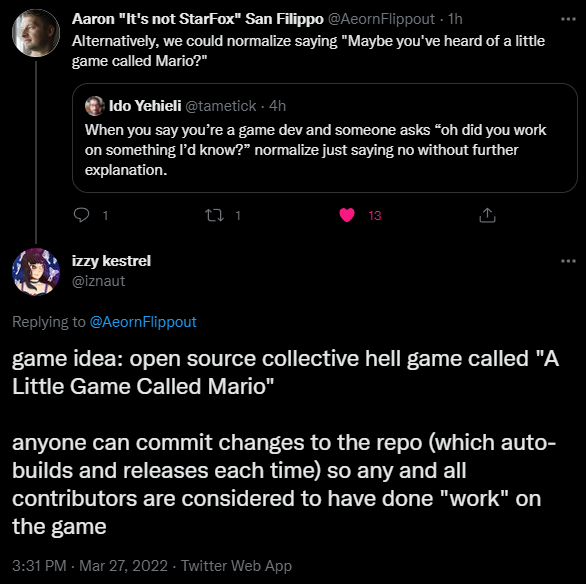 tbh, i probably spent more time writing the README than doing any actual work on the “game” itself prior to launch, though this was all very much in the “collective action” spirit of the project! i wasn’t about to spend a dozen hours trying to make a passable “Mario” sprite, but i did appreciate that it would probably be more likely to pull new folks in if it wasn’t just a default Godot logo jumping around, so i tapped fellow ex-Funomenaut and generally nice guy Alejandro "Cano" Cannizzo to arrange some pixels for our Little hero. 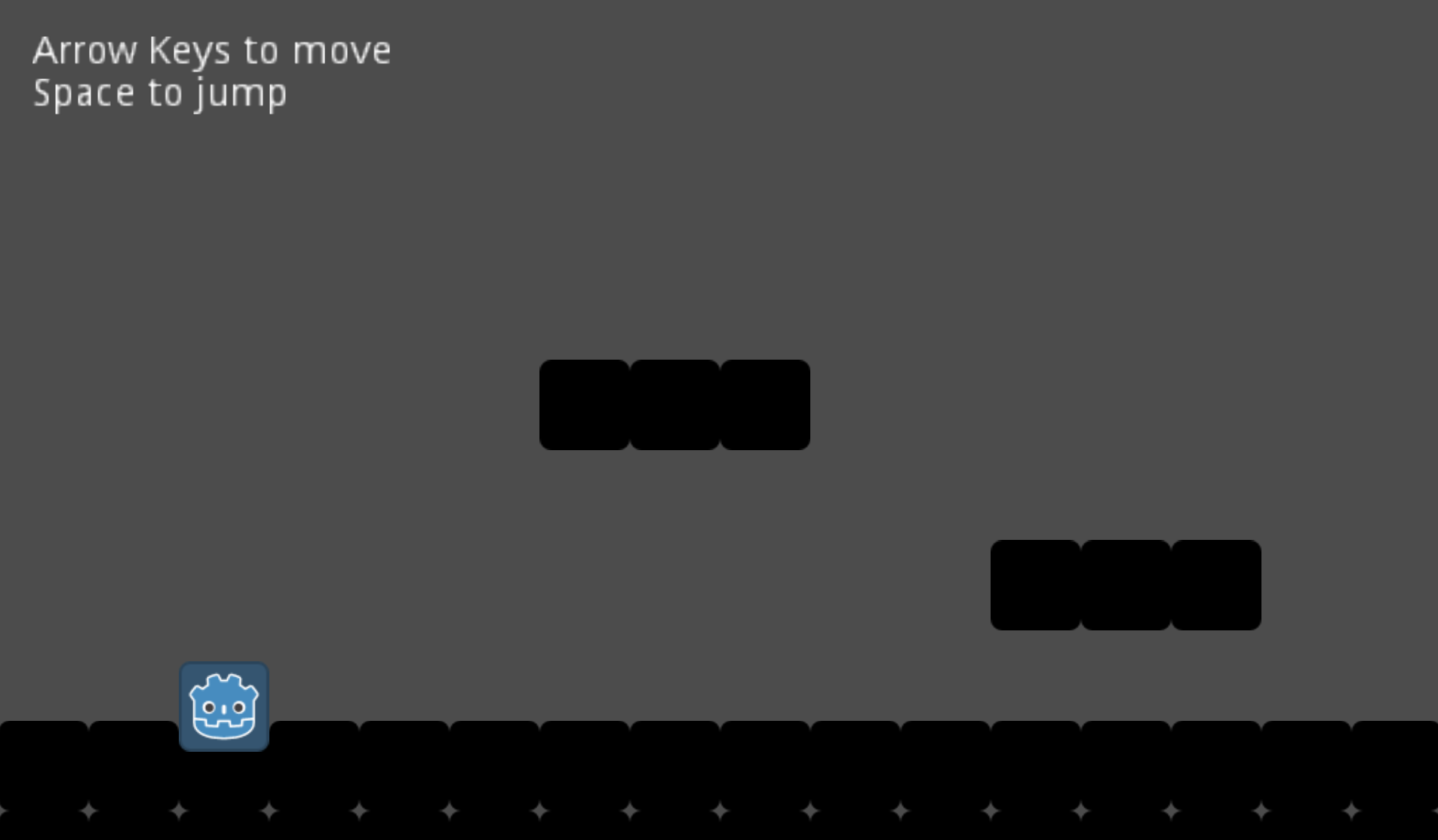 the first 'release' really wasn't very exciting to look at

i also accepted the limitations of my GitHub knowledge and consulted with the brilliant Emilia Lazer-Walker to sort out some of the finer details around licensing and such, so that’s two folks that i engaged directly to help, but i was shocked when Paul Joannon and Taylor Anderson stumbled across the public repo and started contributing before i had even made it “public” in any meaningful way.

each of these folks brought their own unique skillsets to the table and immediately left their mark on the project - many of these changes (from Taylor’s star block sprites to Paul’s level select portals) continue to persist and likely will for a long time. 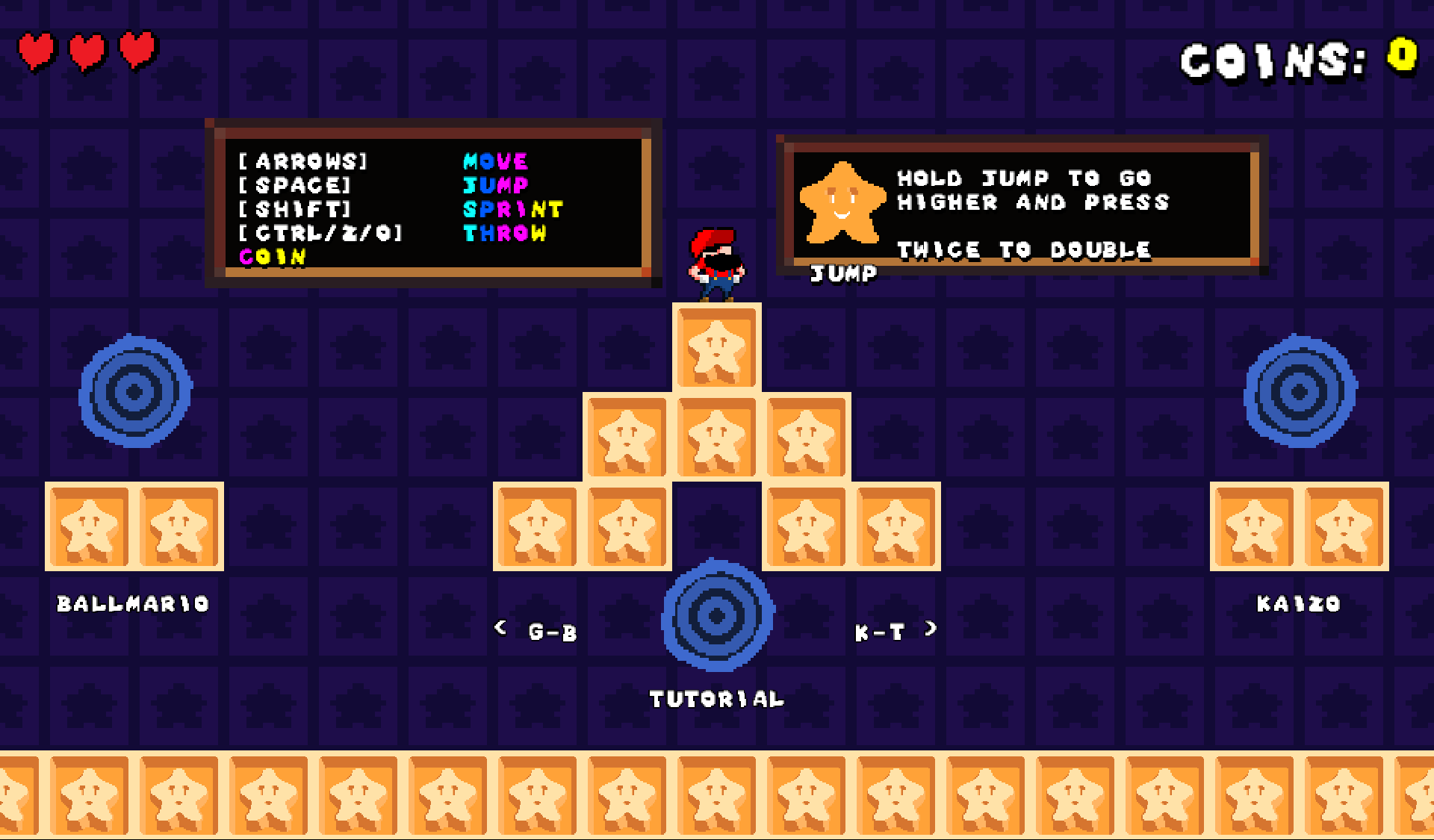 the hub area, as it looks at time of writing

the week leading up to Little Mario’s “launch” (meaning, the day i would casually decide to tweet about it), i participated in Douglas Wilson’s Factions - a social deduction game taking place entirely in a Discord chat. it was a lot of fun but also it kind of consumed my life in a way i was not entirely prepared for! by the time friday rolled around i was feeling a little fatigued by how much attention i had to give the game (a natural side-effect of surviving long enough in a game where ppl are voted out every day), so i was actually pretty fine being eliminated that morning (esp cause it made for very good TV). 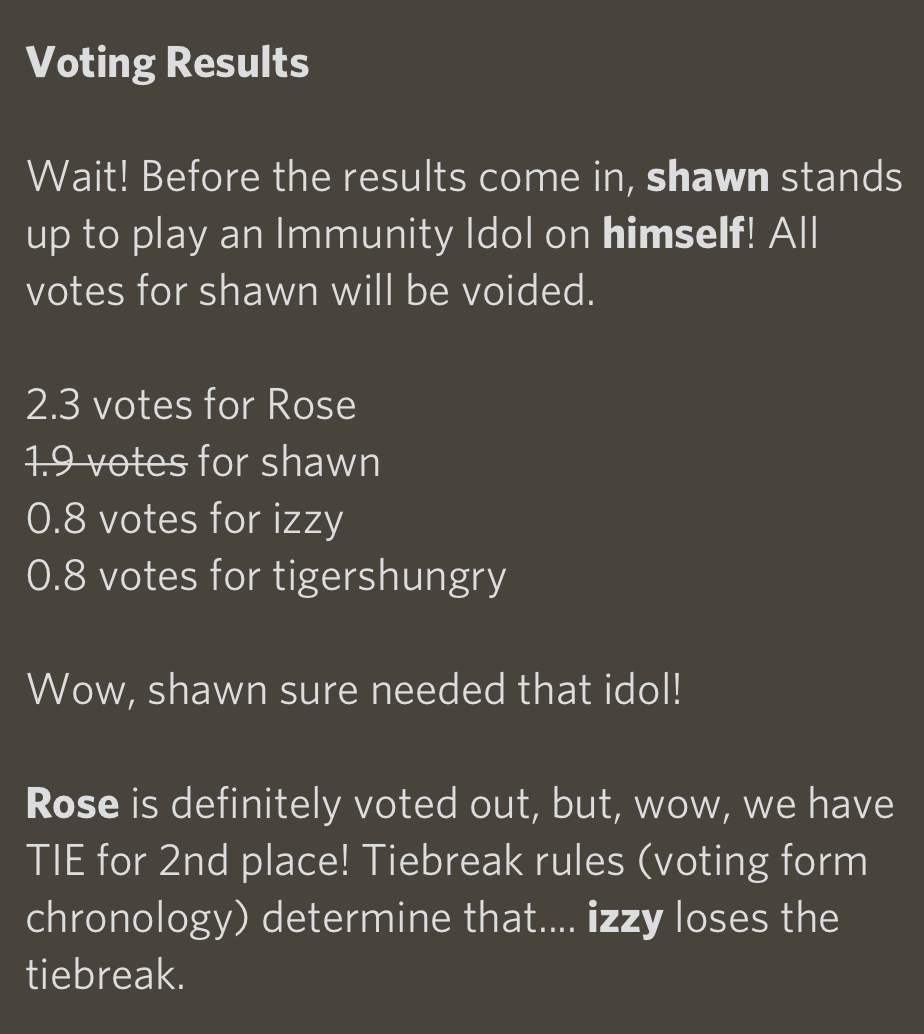 going into the weekend freshly eliminated from Factions, i figured, “what better time than to unleash a Little Mario upon the world?”

well, i suppose it really depends on your perspective. in terms of going slightly viral and getting a lot of attention very quickly, it was a great time. in terms of me being able to comfortably enjoy a date with a cute girl without checking my phone every 5 minutes…not so much

i’m being slightly overdramatic - the date went fine, she was very interested in my Little Mario (who isn’t 😏), but the next couple of days were a Little bonkers.

in retrospect, i can completely understand why Little Mario blew up in the way it did - the concept itself is pretty novel and silly but the “Mario” brand was just too strong to let it quietly slip under the radar. if i had gone with “A Little Game Called Gex” it just wouldn’t have hit the same way, y’know?

don't worry...my boy is in the game too

on one hand, this game lives or dies by the number of ppl that latch on to it and shape it into something great, so i was happy it seemed to be gaining traction.

on the other hand, it’s my responsibility (to some extent), to control this chaos and make sure the wheels don’t fall off just a few days after launch. which is kind of a lot to ask of one person (especially one who tends to be bad about asking others for help)

fortunately(?), at the time i was still living that unemployed life and there were no external factors (aside from my husband, rightfully concerned for my well-being) to stop me from putting in 10 hour days managing mommy’s Little Mario. so i did. when someone asked for a Discord server, i made one. when new folks were lost in GitHub or Godot, i helped them.

Little Mario clearly had a lot of potential and promise, but that meant nothing if we didn't have good processes in place to support the ppl who wanted to help the project grow. it's still not perfect, but it's a hell of a lot better than it was a month ago. 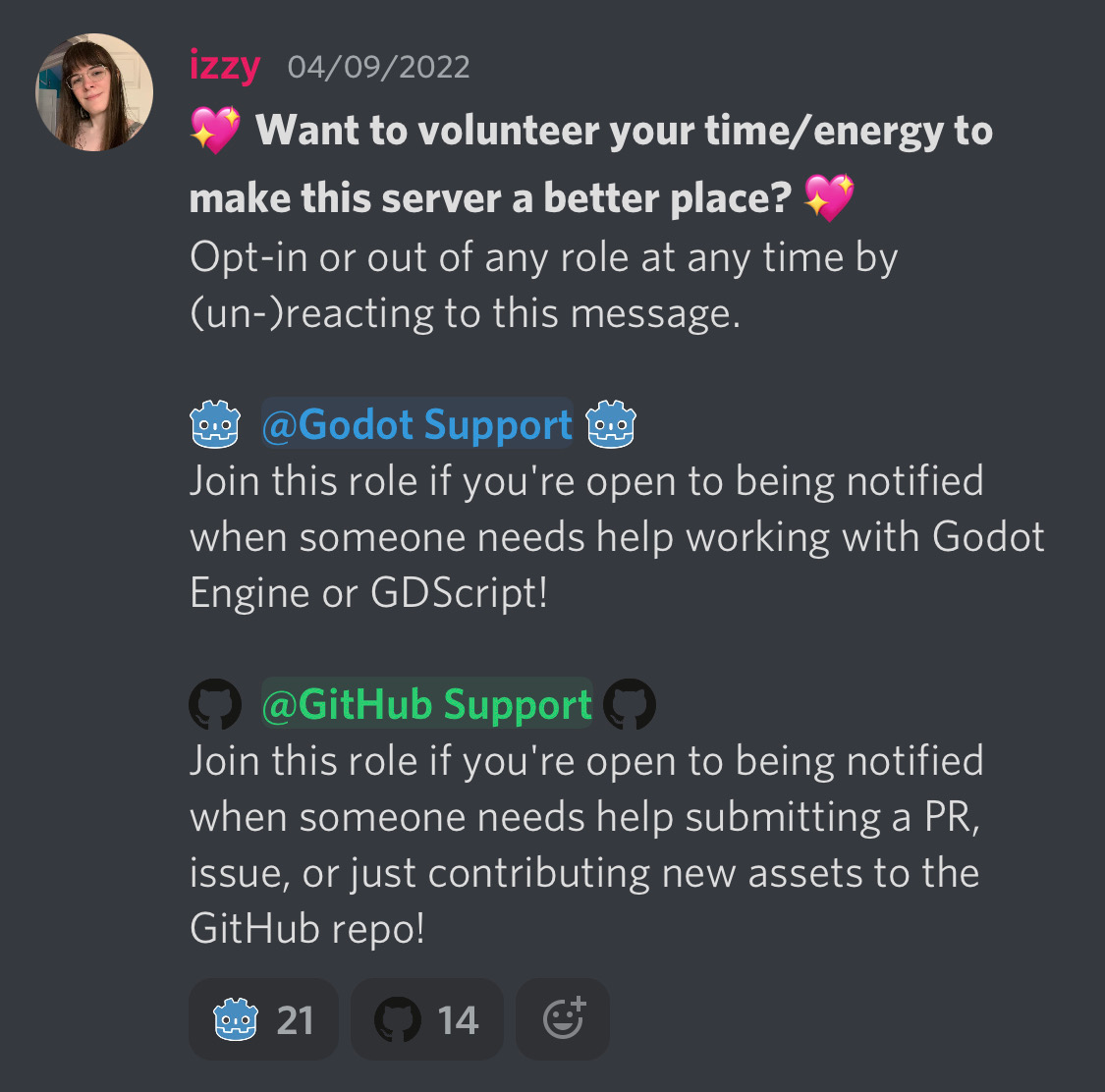 i enjoyed my time spent sanding down rough edges at the organizational level, but it was easy to get sidetracked doing more granular support in real-time. i read every new message on the Discord and if someone else didn't respond quickly, i felt obligated to assist...even if i didn't really have the expertise required to do so.

as time went on i started to find my rhythm and learned how to delegate more effectively. GitHub problem? talk to Em or one of the handful of folks with the self-assigned “GitHub Support” Discord role. Godot issue? talk to Paul or one of the other “Godot Support” ppl.

in a project with no defined scope and infinite potential, i quickly learned that i needed to spend my precious time wisely.

i cannot stress enough how much i learned making this Little Mario. about myself, about other folks, about GitHub and Godot…it’s truly wild. the project is so weird and counterintuitive in so many ways that you can’t help but come out of it with your perspective shifted in some meaningful way. some examples:

so many folks came into the Little Mario community saying things like “i’ve never made games before, i don’t know how i can contribute” and to that i would often say, “well, what are you good at? or what would you like to learn?”

everyone is good at something and games are comprised out of many somethings. i’m so proud of everyone who wandered into the Discord and made an attempt to engage bc honestly, that’s half the battle. if just one person (besides me) came out of this experience feeling empowered to do something they thought they couldn’t, then i consider it a success.

i’d like to round this out by highlighting some contributions during our first “game jam” event - there was some internal discussion around how to structure this and incentivize participation, but ultimately the consensus was that we didn’t want to make it a “competition” or anything that would go against the collaborative spirit of the project. so how do you reward contributors, then?

if this WERE a “competition”, i'd have to recuse myself passing judgment on any gex-centric content

deserved title or not, i am the “creator” of Little Mario and the least i can do is check out the contributions and write some nice words about them (as i am wont to do anyway). our theme was “Villainy” (selected by Taylor), though we recognize any updates submitted during the jam period (April 25th to May 2nd) as “entries”, regardless of how thematically appropriate they may be. that said, it's just not going to be that interesting for me to write about bugfixes and stuff so i'm going to focus on the things that have the most gameplay impact.

everything here has made its way to public release already, but i’m going to be checking out each change via the per-submission links that our clever GitHub automations generate, just so it’s easier for me (and you, the reader!) to test out them out.

in addition to all the folks above, i want to shoutout FBI-Donut for giving the DDR mode some much needed love and LilWaddleDee for this great "Evil Eye Block" sprite (that may or may not have made it into the full game yet, i am honestly not sure)

so what's next for Little Mario? i mean, i'm probably the last person you should ask lmao - i don't even know how to play the damn game half the time

contributions have certainly slowed down a bit in recent weeks (shoutouts to Monochromia on the Discord for suggesting the jam to stir up some activity), but even Little Mario drops dead tomorrow i'll still feel pretty good about what we've accomplished here.

i've been personally invested in collective models since getting involved with a local housing cooperative a few years back - spending countless hours donating my technical expertise to a community that otherwise wouldn't have it. i put a lot of the lessons learned from my experience there into Little Mario and the lessons i've learned from Little Mario will certainly inform whatever weird shit i get up to next. 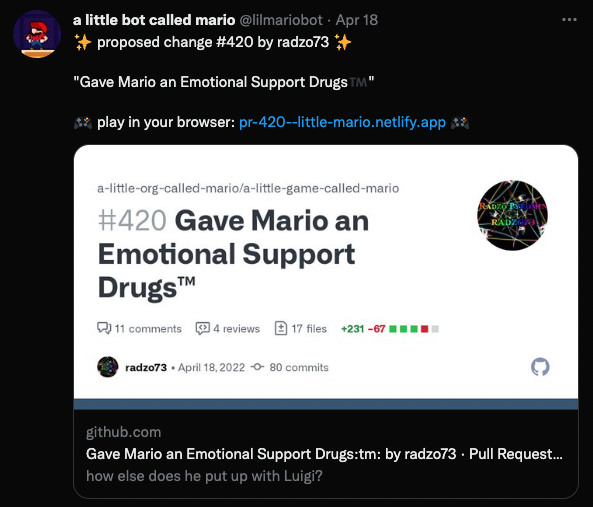 i am endlessly greatful to all the folks i name dropped in this post for all their hard work, to all the other contributors that i didn't name, and last but not least, you for taking an interest in what i had to say here. i hope you found it inspiring!

if you can spare some of that inspiration, please consider dropping by the Little Mario Discord! or just pump it into whatever your creative vehicle of choice is.

either way, me and my Little Mario will be rooting for you.